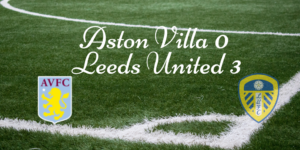 Three is indeed the magic number. Three goals saw us go home with all three points, just like the last time we visited Villa Park.

Three goals for Patrick Bamford, his first Premier League hat-trick and the first for a Leeds United player in the Premier League since Mark Viduka in 2003.

It was one of the most complete performances from this current Leeds United team that we have seen and it was one achieved without both Kalvin Phillips and Liam Cooper.

Pascal Struijk was Phillips’ replacement but found himself in the referee’s book after just 10 minutes. He was was in danger of receiving a second yellow, so he was replaced after 20 minutes by Jamie Shackleton. Struijk looked a forlorn figure as he left the field but it was reminiscent of the early days under Bielsa when Kalvin Phillips was substituted before half time after an early booking in a game against Swansea. We all know how that has turned out!

There were chances for both teams in the first half with Patrick Bamford and Rodrigo both going close for Leeds but both had their shots saved. Villa also went close but Ross Barkley saw his efforts thwarted by Ilian Meslier before Luke Ayling cleared a Jack Grealish shot off the line.

There was an early chance for Grealish at the start of the second half but it was all Leeds after that and the breakthrough came on 55 minutes when Bamford took advantage of a loose ball to score from close range.

If his first goal was simple, the next two were nothing but. His second came on 67 minutes, a sublime shot from outside the area which found its way into the corner.

The hat-trick was complete just 7 minutes later after Bamford found space in the area and curled his shot past Villa ‘keeper Emiliano Martinez.

There were chances for a fourth, with both Bamford and Pablo Hernandez having chances to add to the lead but three was meant to be. It was a well deserved hat-trick and provided just reward for all the hard work Bamford puts in. If he continues like this, an England call up is not out of the question. This is what Bielsa does, he turns good players into extraordinary players.

Despite Bamford’s hat-trick, this was a genuine team performance. You would never know that Ayling and Koch have not played together in central defence before or that it was Gjanni Alioski’s first start of the season. The standard is so high at the club that whoever comes in is just as capable as the player they are replacing.

This is building to be another special season, hopefully we can be there to see it unfold in person soon.

Good luck to @LUFC Women who are in cup action today and take on York City!

Thank you for a lifetime of service and dedication Ma’am.