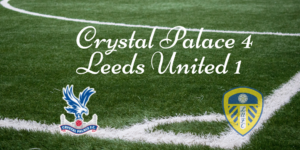 Leeds United suffered a 4-1 defeat for the second time in a week following defeat to Crystal Palace on Saturday.

Scott Dann opened the scoring after just 12 minutes and Patrick Bamford looked to have equalised just minutes later but VAR ruled that his hand was offside.

Bamford got on the scoresheet properly on 27 minutes and Leeds looked like they were back in the game but it wasn’t to be as  Helder Costa scored a bizarre own goal which allowed Palace to go into the half time break with a 3-1 advantage.

Raphinha returned from injury to replace Costa for the second half but we just didn’t get into this game and Jordan Ayew’s goal on 70 minutes sealed the three points for Crystal Palace.

After our fantastic start to life in the Premier League, this was a game I was expecting to get something from, but we seemed to lack any of the spark that has been on show in the early games.

The team news was interesting with Pascal Struijk in midfield along with Gjanni Alioski. We later found out that Jamie Shackleton has suffered an injury in training on Friday but that Pablo Hernandez was fit and available to play, he just wasn’t selected. The assumption is that this was in response to his reaction to being substituted against Leicester last Monday but it is a concern that the unease rumbled on to an extent that Pablo was omitted from Saturday’s game.

We now have another international break and it seems the timing couldn’t be better. Although we have to wait anxiously to make sure there are no injuries with so many key players on international duty, this time allows for Marcelo Bielsa and his team to plan out return to form and the Hernandez situation can be resolved quickly and quietly.

We will regroup and we will be ready for Arsenal next time out.

For further news and views on Leeds United follow Ladies Who Leeds on social media.