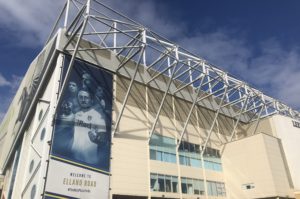 In the midst of all the celebrations, you would have been forgiven for forgetting that there was a game yesterday.

It was a surreal feeling watching a game where the only aim was to increase our highest ever league points total.

Marcelo Bielsa made 7 changes to the starting line-up yesterday, some as a result of the celebrations on Friday but others as a reward for their supporting roles this season. The changes meant Mateusz Klich’s run of consecutive starts ended at 92, after seeing his social media posts, I’m sure he didn’t mind sitting this one out!

In one of those moments that only sport can really provide, Leeds walked out to a Guard of Honour from Derby yesterday. After last season’s drama of Spygate and the play-off defeat, Derby have found themselves as one of our great rivals and I am sure that moment felt like some form of justice.

Bielsa once said during his time at Marseille, “Accept the injustice, because everything evens out in the end”. Well yesterday it did, and we walked out onto the pitch at Pride park as Champions whilst Derby will remain in the Championship for another season.

The game, when it finally started, was halted after just 7 minutes after a shoulder injury for Tom Lawrence who was replaced by Jason Knight.

The breakthrough nearly came just before half time when Ian Poveda broke through and put the ball in the net, however he was adjudged to be offside.

We had our injury break when Gaetano Berardi suffered a knee injury and was stretchered from the field, replaced by Luke Ayling. Hopefully his injury is not too serious, he’s a player who gives his all to the club and it would be nice to see him rewarded with a contract extension for next season.

After a goalless first half, it was Derby who broke the deadlock in the second half, with Chris Martin scoring on 54 minutes.

Derby had just two minutes to enjoy their lead as Pablo Hernandez scored on 56 minutes to level things up.

Jamie Shackleton scored his first senior goal for Leeds to make it 2-1 and Derby gave us a parting gift with an own goal to make it 3-1.

The Leeds players would have been forgiven for being a little tired after the two days of celebrations but this is a team determined to walk away from the Championship on a high and condemn Derby to a fourth consecutive defeat.

We finally bid farewell to the EFL when we face Charlton at home on Wednesday and ironically, they were our last opponent in the Premier League 16 years ago.

After the game, we will be presented with the EFL Championship trophy, our first silverware in since 1992 and it is the exact same trophy that Gordon Strachan lifted 28 years ago.

Our club is back.