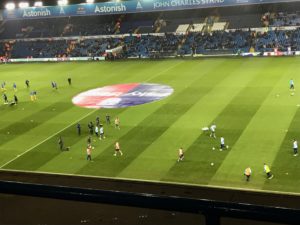 A game that can only be described as ”doing a Leeds”.

With results earlier in the day going for us, we had the opportunity to break further away from 3rd place and put pressure on league leaders West Brom, who could only manage a 1-1 draw with Barnsley earlier in the day.

However, we failed to fully capitalise and looked far from the Leeds we have been accustomed to watching this season.

The big surprise was the bench with both Roberts and Shackleton absent. Bielsa stated in his press conference that they were available for selection, instead it lacked experience and highlighted how injuries have impacted us.

From the start we looked shaky and failed to settle, we resembled anything but a team chasing Premier League status.

Our misplaced passes created openings for Preston early on and both the players and Elland Road crowd appeared nervous.

Preston had done their homework, they played the high press that we so often do to very other team, and we simply couldn’t respond.

Alan Browne opened the scoring for Preston on 23 minutes, and Leeds looked to go from bad to worse. Preston continued to look dangerous whilst Leeds longed for half time.

Our Plan A has been thwarted in recent weeks and there was no sign of Plan B. What is becoming apparent with Leeds is that our tactics are so finally tuned that when things don’t go as planned it takes ages for a solution to be found.

In the second half Bielsa opted to chance tactics, substituting Patrick Bamford for Eddie Nketiah.

A decision which I disagreed with and judging by the boos from the crowd, so did the majority of the Elland Road crowd. In a game where we needed a goal, it seemed the perfect opportunity to play both strikers.

There has been a lot talk of Eddie and his commitment to the team, he seeks more playing time and reports suggest he is having to be convinced to stay. If this is the case then Leeds United isn’t the team for him, we only want and need players who are committed to the team.

As the minutes counted down, it looked like a defeat was on the cards, shots from Alioski and Eddie failed to materialise. Step forward Stuart Dallas, he found the back of the net through a deflection and kicked Elland Road into action. That never give in mentality shining through.

Six minutes of added time, we chased down a winner and it looked like scenes from last year’s Boxing Day clash would be replicated.

However, it wasn’t to be and honours were evenly shared.

Despite the performance, we are still in a strong position, 8 points clear of 3rd..

We have a quick turnaround and will look to respond against Birmingham on Sunday, which will be our final game of the decade.