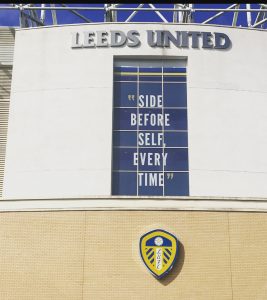 I wasn’t ready for Marcelo Bielsa to leave Leeds United.

There had been rumours that this could be his last season, but I turned the radio off and figured I had 12 games to come to terms with it. I thought that we would say farewell in May in our last two games. I imagined he would walk away to a standing ovation and the crowd chanting his name with one of his protégés ready to take the reins.

I didn’t expect him to be sacked in February with no prior warning and no chance to say goodbye. I think the collective fanbase is incredibly thankful to the fans who made the trip to Thorp Arch to show Marcelo how grateful the fans are and that he wasn’t just allowed to leave in the dark on his own on Sunday night.

Supporting Leeds United is a rollercoaster, but this doesn’t feel like the ride has finished, it feels like we have all been forced to get off at the bottom of a dip, when we can see that there is still another climb to come.

I saw one tweet from a fan of another club who said it sounded like the Leeds fans were grieving and that is exactly how it feels. The outpouring of emotion from the fans on social media and on the LUFC Trust website shows the impact Marcelo Bielsa had on Leeds fans around the world. I think very few managers can say they changed lives in the way Bielsa has.

I remember the day he signed, I was sitting at my desk and asking a colleague who he was, he told me that we were lucky to get him and to enjoy the ride. I certainly didn’t expect to be in tears 3 ½ years later when he left us.

I was in Las Vegas for that very first game against Stoke, sat by the pool at 8am watching this new brand of football and I genuinely couldn’t wait to get back to Elland Road to see it live.

The same players who just months before looked lost under Paul Heckingbottom looked ready to win all before them and there were games when we were simply mesmerising.

Each fan will have their own game which stands out for them but the game for me was West Brom at home in March 2019 when Pablo Hernandez scored after 16 seconds and Gjanni Alioksi looked as if he could run all week if he needed to.

Bielsa brought a new brand of football, he made it exciting to be a Leeds fan again but more importantly he made us proud to be fans of the club again.

His decision making was baffling at times, but it all became clear eventually. The infamous Aston Villa game is probably the best example and it seemed ludicrous at the time but it was a Bielsa life lesson in doing the right thing. It also earned us the FIFA Fair Play award which was in itself a shock that we were even been talked about at the awards ceremony.

I am a great believer in things happening for a reason. That game brought about the end for Pontus Jansson, it seemed unthinkable that he would go but it gave Benjamin White a chance. Benjamin White who became an integral part of the team, playing every single minute of the 2019/2020 league season and being talked about as a future England defender.

That promotion season was special and although we weren’t there for the actual promotion, it still felt like we were part of it. This was our club again, the team, the board and the fans all as one. I am so glad it was covered by Amazon, so we can all keep those memories.

We lit the Premier League up in our first season back, so much so that we became everybody’s second team. Players who looked average in the Championship became Premier League regulars and Kalvin Phillips became the first name on Gareth Southgate’s team sheet and Patrick Bamford, who just a season early was fighting Eddie Nketiah for a start, became an England player.

This happened because of Marcelo Bielsa and his ability to see things nobody else can.

I am never going to play for England, I doubt I can even kick a ball straight but I am writing an article now for a blog we would never have started if it wasn’t for Bielsa.

Sarah and I have supported Leeds for as long as we can remember but for the 14 years prior to Bielsa, supporting Leeds was at times a chore and I always felt a pang of jealousy when people spoke about the Revie era, the Wilkinson days and the Champions League nights. We just seemed to have joined in when it all fell apart.

Then it was our turn, our turn to feel proud of our club and to watch some of the best football I have ever seen us play. The club felt alive again and we decided to create a blog about Leeds United and with that came television and radio opportunities and the chance to talk about the club with other fans.

There are so many similar stories about how Bielsa has inspired people in a non-footballing way and how he has inspired a new generation of Leeds fans.

There are very few managers that can unite a fanbase with mesmerising football but offer life lessons as well.

Will we see his like again? I don’t think so. Football is a corporate world these days, driven by money. We were lucky that we have 3 ½ years of a manager who didn’t care about that but cared about the game and the people involved and he stayed true to his beliefs until the end.

If he goes to another club, it’s safe to say their social media team will wake up to a few thousand more followers! We join the Widows of Bielsa club now.

The club will go forward and we will all sing again, but the Bielsa years will be remembered forever at Leeds United.

Farewell and thank you for everything Marcelo, it wasn’t meant to end like this.