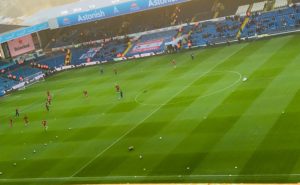 We returned to the top of the Championship table in style yesterday, a resounding victory and a strong team performance ensured we finished with 5 wins from 5 in November.

After two away games in 8 days, you could have been forgiven for thinking this game would get off to a slow start.

It was anything but slow, with Luke Ayling going close to scoring after just a minute. However, it was the former Middlebrough striker Patrick Bamford who provided the perfect response to the jeers from the Boro fans when he headed the ball in after just 3 minutes.

He came close to a second just two minutes later, with Middlesbrough keeper Aynsley Pears just about turning the ball away.

Leeds could, and probably should have been 3 nil up after the first ten minutes, but Boro somehow kept them out and the game settled down from the frenetic pace of the start.

Mateuz Klich was rewarded for his first half performance with a goal on the stroke of half time to give Leeds a 2-0 lead.

Leeds continued to pile on the pressure after half time and it was Helder Costa who scored our third. His first league goal for Leeds and what a strike it was, hit with so much power it could have broken the net.

Klich was in the mood for scoring goals and got himself another on 73 minutes, with a great strike from the edge of the box which nestled nicely in the top corner.

A performance like that has been threatening for a while, we dominated from start to finish and had the game continued for another hour, I doubt there would have been any complaints from Leeds fans. It was certainly one of the most enjoyable games I have watched for a while.

It was a game where the Man of the Match award could have gone to any number of players, however Patrick Bamford once again walked away with the award.

Bielsa’s persistence with Bamford has paid off and it’s nice to see him playing well, his efforts acknowledged by Leeds fans with a standing of ovation.

The only downside from today was a fifth yellow card for Kalvin Phillips which will see him miss the Huddersfield derby next Saturday.

Will this see Ben White take his place in midfield? Or will this provide an opportunity for Jamie Shackleton to return? What we know is that Bielsa will have a plan.

📋 Patrick Bamford and Luke Ayling start for the U23s tonight, with Joe Gelhardt on the bench

🆚 #LUFC U23s take on Manchester City at the Etihad Campus from 7pm tonight! Watch the game live on LUTV!