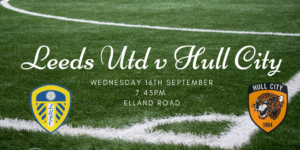 Going into yesterday’s fixture, Leeds United didn’t have a good track record in the Carabao Cup and that pattern continues after a 9-8 defeat to Hull City on penalties, saw Leeds make an early exit from the competition.

Marcelo Bielsa opted to change the starting Xl completely from the team who faced Liverpool last weekend, with notable changes including Kiko Casilla starting in goal and given the Captain’s armband.

Hull City came to Elland Road to play, and were dominant throughout, giving no indication that two leagues currently sit between the two sides.

Leeds failed to break down the Hull defence for the majority of the game and it took until the 93rd minute for Gjanni Alioksi to level the scores.

A record penalty shoot-out for Leeds saw Jamie Shackleton narrowly missing his, to send Hull through to a third -round fixture with West Ham.

Despite the changes, this is still a Bielsa side and that performance was far from a Leeds United one.

With the cup no longer a distraction, our focus is back on the Premier League this weekend as a home fixture with Fulham awaits.