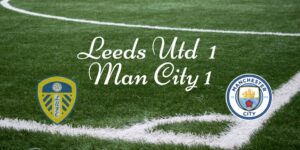 The master v the apprentice, a 16 year wait, this was a fixture anticipated by many and it didn’t disappoint.

City pressed forward and chances followed for Kevin De Bruyne and new signing Rueben Dias. It was through a clinical finish from Raheem Sterling who gave them the lead on 17 minutes.

Whilst City looked comfortable throughout the first half, it took two saves from Ederson to keep their lead after both Stuart Dallas and Luke Ayling went close in the closing stages of the first half.

Whilst many thought our Premier League honeymoon period was over, Bielsa was plotting our comeback.

The Leeds United side we have become accustomed to seeing under Marcelo Bielsa emerged for the second half. The dynamics of the game changed and Leeds were now the team in control, taking the game to City and searching for an equaliser.

Poveda producing one of his finest displays since his arrival from Man City in January, he looked a constant threat and made life hard for Benjamin Mendy.

Our persistence paid off and on 59 minutes Rodrigo equalised, securing his first goal in a Leeds United shirt.

Both teams pressed for a winner, with both Sterling and Bamford going close in the closing stages of the game.

A 1-1 draw was a fair result and again highlighting that Leeds United hold no fear in the Premier League, our elite fitness and attacking ethos are a match for any side.