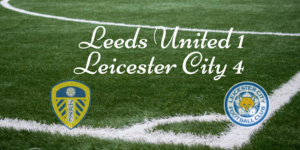 Leicester City were comprehensive winners on what was a very wet Elland Road.

Liam Cooper returned to partner Robin Koch at the back but it wasn’t a good night for the Leeds defence. Whereas in our previous defeats to Liverpool and Wolves we have been in contention, we were just outplayed in this game and the scoreline reflected that.

We started well and Patrick Bamford had an early chance but his effort was straight at Leicester ‘keeper Kasper Schmeichel and just 17 seconds later, Harvey Barnes made no mistake as he took advantage of a misplaced back pass.

Leicester doubled their lead on 21 minutes with Youri Tielemans getting his first of the evening as we look uncharacteristically anxious throughout the half.

The second half started well for Leeds with Stuart Dallas finding the net after just 3 minutes but it was a game in which we just could not settle into and the body language of the players reflected that. Pablo Hernandez was replaced after 67 minutes and his discontent was clear for all to see as he walked off the pitch.

Jamie Vardy scored Leicester’s third on 76 minutes and then VAR awarded a late penalty, which Tielemans scored to give the Foxes a comprehensive victory.

It is a game we will learn from and perhaps better to come early in the season with time to work on specific areas. This is not the Championship anymore and we will face tougher challenges but hopefully next time around, we will be ready for them.