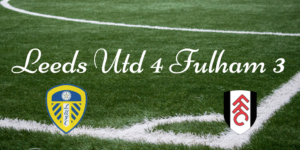 The league might be a different one but the same nervous feelings were back on Saturday as Leeds United held on to record the first Premier League win of the new era.

For the second game running, we were involved in a 4-3 thriller. Thankfully this time we came out on top, beating fellow newcomers Fulham.

There was a late change to the starting line-up after Pablo Hernandez pulled up in the warm up and was replaced by Rodrigo. The change didn’t unsettle Marcelo Bielsa’s side and it took just 5 minutes for Helder Costa to open the scoring.

Fulham were level when Aleksander Mitrovic converted from the penalty sport after Joe Bryan was adjudged to have been fouled by Robin Koch.

Just 6 minutes later, Joe Bryan turned culprit and Mateusz Klich was on the score sheet for a second game in a row after Patrick Bamford was brought down in the box.

The half time break saw just one change with Tyler Roberts replacing Rodrigo.

The second half pace was just as frenetic as the first and just like the first, it only took 5 minutes for a goal. Patrick Bamford making it two goals in two with a strike from close range.

Helder Costa got his second shortly after and Leeds were looking comfortable at 4-1 in the Elland Road sunshine.

However, Fulham forced their way back into the game when De Cordova-Reid beat Ilian Meslier and the nerves started to intensify when Mitrovic got his second on 67 minutes.

A nervy end to the game ensued but Leeds held on to secure the victory and take the three points.

The pace was relentless and there are questions from commentators and pundits as to whether we can keep the pace up for the season. Well yes, we can because we have done for the past two seasons. There is no doubt that there will be teams that make it difficult for us but our fitness and intensity will remain.

There is work to do in defence, whilst we have score 7 goals, we have also conceded 7 and you cannot see Bielsa settling for that. As Patrick Bamford suggested in his post-match interview, there are likely to be some long meetings at Thorp Arch this week.

Next up is a visit to Bramall Lane as we take on Sheffield United, our only Yorkshire rival in the league this season.