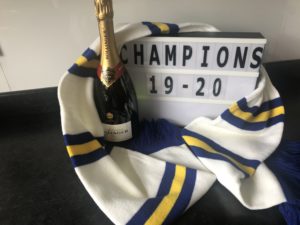 Leeds United have been promoted to the Premier League.

It took 16 years, 2 months and 10 days to confirm our return to the top tier of English football but yesterday evening, we were promoted.

Promotion was confirmed in a game just along the M62 in Huddersfield without Leeds even kicking a ball. In the 86th minute, Emile Smith Rowe scored to give the Terriers victory and seal our promotion.

We sealed promotion in our Centenary year with a goal scored at 19:19. The football gods have clearly enjoyed writing the script for this season.

Today, we were crowned Champions.

Again, we weren’t on the field but Brentford’s loss to Stoke means our lead at the top is unassailable. It also means that we will walk out to a Guard of Honour from Derby County tomorrow and although there have been personnel changes at Pride Park, it still has significance considering the events of last season.

So, Leeds United have been promoted to the Premier League as Champions with two games still to play.

We have all been waiting for this day for so long and now it’s here, I’m not entirely sure I know how to feel and I’m sure I am not the only one. There is a range of emotions from elation, excitement and relief, along with sadness for those who are no longer here to celebrate with us.

It also still feels quite surreal and hard to believe that tomorrow we will just be able to watch the game, safe in the knowledge that at long, long last, we are back where we belong.

They did it. Marcelo Bielsa and his team got us back.