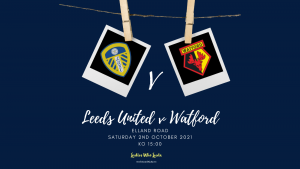 We take on Watford at Elland Road today looking to take all three points before heading into another international break.

Home games at 3pm are like buses all of a sudden, we haven’t had one for so long and now we have had two in as many weeks.

It has been said many times in the media and by various pundits that we haven’t won yet this season and we are looking as if we may suffer ‘second season syndrome’ but I don’t think we are and I think that will come to an end today.

We lost three players who were key members of of our Championship winning side over the summer, including Pablo Hernandez. Magician shaped holes are not quickly filled, that’s what makes players like him so rare and so special. However, there were signs last weekend, particularly in the first half that we are starting to find our feet in this new season.

We are still without Patrick Bamford, Luke Ayling and Robin Koch but we will see both Diego Llorente and Pascal Struijk back from injury and suspension respectively.

Marcelo Bielsa may look to bring one of those into central defence alongside Liam Cooper, however Charlie Cresswell did not disappoint last week and has today been rewarded with an England u21 call up.

Watford are without Peter Etebo who suffered a torn thigh in their defeat at Newcastle last week but otherwise have no other concerns.

A win before the international break? Yes, please!!