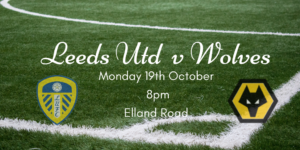 Leeds United welcome Wolverhampton to Elland Road tonight, our first experience of Monday Night Football this time around in the Premier League.

We finally return to Premier League football after a 16 day break due to internationals and television scheduling. It seems such a long time since our last league game against Manchester City.

After watching many of our players on international duty, the game against Manchester City is distant in the memory.

The problem with having so many international players is that the risk of injuries. The extra travel, short turnaround time for games and the different standards of training. Liam Cooper has once again returned from Scotland duty with an injury for the second time this season and now faces a late fitness test to determine whether he makes the team tonight.

His likely replacement, Diego Llorente also suffered an injury whilst on international duty for Spain and is definitely out of the game tonight. If Cooper does not make the game, Pascal Struijk is likely to come into the side alongside Robin Koch in defence.

There is positive news in that Pablo Hernandez should be back in the starting line up after missing the last two games and Jack Harrison returns after he was ineligible for the game against Manchester City.

New signing Raphina could also be in line to make his Leeds United debut, although I think we are likely to see him amongst the substitutes rather than starting.

Wolves have Fernando Marcal back in training after his recent calf injury but there is no further news on whether any of the Portugese players need to isolate following Cristiano Ronaldo’s positive Covid test, so we can assume they are all available to play.

There have been 27 goals so far this round of Premier League games and I am sure we will see more this evening as both teams like to attack. Patrick Bamford will be looking to continue his run of form and he looked like a striker full of confidence before the break, so hopefully that will carry through into tonight’s game.

If there was a further proof needed of just how crazy this year has been, if we win tonight, we go third in the Premier League.