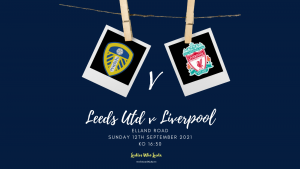 Today sees Jurgen Klopp’s Liverpool visit Elland Road as we look for our first league victory of the season.

The last time we played Liverpool at home, we were in the midst of the now-doomed European Super League idea. Whilst there were no fans in the ground, the protest outside gave Liverpool an idea of the noise that will be in Elland Road tomorrow.

With no disrespect to either Everton or Crewe, I am expecting the atmosphere to be even better today.

The good news is that FIFA have allowed the Brazilian players to take part tomorrow after one of the strangest decisions I have seen in football. The Brazilian FA asked FIFA to ban players from playing for their clubs, because they didn’t travel to a country they weren’t allowed to and those who did make it, were marched off the field like criminals.

This means that Liverpool have Allison and Fabinho available, whilst Raphinha is available for Leeds.

He is likely to return to the starting line-up after missing the cup game against Crewe and he will be joined by Stuart Dallas and Mateusz Klich who started on the bench in that game.

The question is whether Dan James will be involved following his move across the Pennines from Manchester United. He is a player that Marcelo Bielsa has wanted since he was playing for Swansea and after a failed transfer and a stint in Manchester, Bielsa finally got his man.

James clearly has something that Bielsa values but it will be interesting to see if he feels he is Leeds-fit for tomorrow. There is so much emphasis on conditioning that even Kalvin Phillips had to settle for a place on the bench after his return from England duty so I don’t expect him to start tomorrow but he may have a place on the bench.

Liverpool had an injury scare with Virgil van Dijk who was injured playing for the Netherlands but he has been cleared to play. There is a doubt over James Milner, although he is back training, an injury means he may be denied a return to the ground where it all began 19 years ago.

Klopp spoke recently about playing Leeds saying, “that’s now one of the most intense games in the world of football because they run like mad. To get even a little advantage, you have to put a proper shift in.”

Hopefully at the end of this evening, he still feels that same after seeing us take all three points.