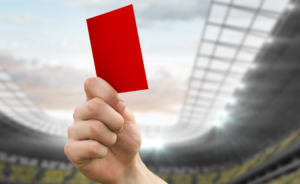 Leeds United won an appeal to the EFL.

Please do not refresh your screen, you did read that right.

This is obviously good news and saves Gaetano from being the most red-carded Leeds player in our 100-year history, although that’s surely only a matter of time!!

However, it’s not right that we had to play with 10 men for 85 minutes based on a wrong decision (9 minutes added time).

Had we won, this wouldn’t be such a big issue but we didn’t and those 3 points might be the difference between us getting promoted or being resigned to the Championship again.

The EFL have said that VAR is a long way from being introduced to the lack of cameras at each game, but why not ensure that there is a camera and have a Rugby Union style TMO where the referee can just double check a decision.

It doesn’t need to be full VAR but just a way of ensuring clubs aren’t penalised wrongly.

Hopefully we will be seeing VAR next year and no doubt there will be a post from me about how much I don’t like it!!