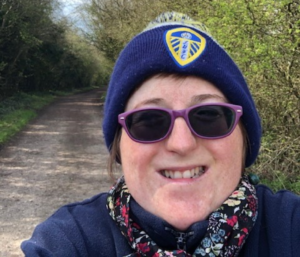 Georgina is the latest supporter to share her Leeds United and Me story.

Leeds United means frustration, passion, friendship and family. Until the world stops going round and all that. I’ve learned some life lessons and made some fantastic friends through supporting the whites. Long may the rollercoaster continue!

2. How long have you supported Leeds?

I actually think the Liverpool game at home back in 2000 takes some beating, a striker’s masterclass from Mark Viduka. Dad got a shirt with his name on the back because of it.

Started going in 1994 Wetherall, Hopkin, Strachan and co… but Alan Smith scoring on his debut against Liverpool, November 14th 1998 was the most striking early memory.

Getting on Dad’s shoulders and getting right up to Gary Neville taunting us from the Man United bus and giving him some stick back!

9. Predictions for the next 5 years?

Leeds United gain promotion, Alan Smith back as assistant coach one day, Pablo’s son to take over as the next Spanish wizard.