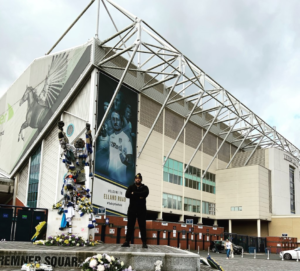 Kagey is the latest supporter to share his Leeds United and Me story.

2. What does Leeds United mean to you?

It’s a long standing relationship that has had extreme highs, brutal lows, but recently; changes were made (Bielsa) and we’re happy again!

September 25th 1999 Leeds 3-2 Newcastle. It was the game for me where I could see that young talented side become a force in the Premier League for years to come – if they were kept together..

Harry Kewell. So many people have forgotten/erased from their minds what a talent he was at Leeds United. A genuine World Class player in an era that was loaded with greats. Kewell was a human highlight reel in a Leeds shirt.

6. What is your earliest Leeds United memory?

Seeing the crowd at Elland Road go nuts when the team scored, it was that image when it clicked for me and I became a Leeds fan from that moment.

David O’Leary with his “babies” is up there, but it’s hard not to say Marcelo Bielsa for giving life back to a club that was dead between 2012-2018.

8. What are your predictions for the next 5 years?

Being a consistently good Premier League side and we can then finally leave rivalries with nothing clubs behind to rub shoulders with the elite again.

We will eventually make the Champions League Final with Kalvin Phillips leading us out as Captain and we will see Erling Haaland come home to win the trophy for us, of course!

Football is back this month!

How are you feeling about the Championship starting again?

📅 EFL agrees to Championship season provisionally restarting on the 20th June, subject to safety requirements and guidance being met