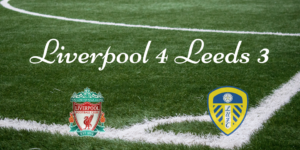 Our promotion from the Championship was a noisy affair and our arrival in the Premier League was just as boisterous.  Our opening game saw 7 goals, 4 disallowed goals, 2 penalties and one questionable VAR decision.

So, what did we learn from Saturday?

We went to Anfield to play and we were unlucky to come away empty handed. Our relentless style seemed to shock both Liverpool and the pundits alike, but we know what to expect, this is Marcelo Bielsa’s Leeds team after all.

There was a late change to the side with Pascal Struijk starting alongside Robin Koch after Liam Cooper failed a fitness test on a calf injury picked up on international duty with Scotland.

With the Premier League comes VAR and we were introduced in the 4th minute when Robin Koch was adjudged to have handled the ball in the box. Replays suggest that this was a deflection and therefore shouldn’t have been awarded but what else did we expect?

Mohamed Salah duly scored the penalty and Liverpool looked in control, however that spurred us into life and Jack Harrison produced a sublime finish to level things up on 12 minutes.

The game was played at a frenetic pace and Liverpool scored their second on 20 minutes when Van Dyke headed in a corner after finding space in the box.

The scores were level for just 3 minutes until Salah scored his second to give Liverpool at 3-2 lead at half time. I don’t know about the players, but I am sure the fans needed the half time breather too.

The pace continued in the second half and Mateusz Klich picked up where he left off last season with a strike on 66 minutes.

Leeds were not at Anfield to watch Liverpool play and Shackleton replaced Klich on 81 minutes as we looked to push for a winner.

However, it was not to be as Rodrigo showed why he’s a striker and not a defender with a reckless challenge on Fabinho in the Liverpool box.

Mo Salah completed his hattrick on 88 minutes when he converted the penalty which saw Liverpool take all three points and probably a feeling that they got away with that one.

There are clearly areas to work on with set pieces being the main one, Liverpool did not score in open play, all 4 of their goals came from set pieces. However, we had two defenders who had never played together, Koch on debut and Struijk playing only his third game for the first team.

It wasn’t the result we wanted, but if we continue to play like that, this season promises to be a special one.