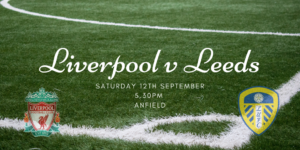 So here we are, 16 years later and we finally get to go back on our favourite rollercoaster, the Premier League one.

I have always likened the first day of the new season to getting on a rollercoaster. You know there are twists, turns and dips along the way but you’ll always enjoy the ride.

Much has been made of the long wait to return to the Premier League and rightly so because 16 years is a very long time to wait. However, we can’t look back now, this is a new start with a new team. We will always have the memories of last season but now it’s time to refocus and start the next challenge.

That challenge starts tomorrow at Anfield against Jürgen Klopp’s Liverpool.

Just like us, Liverpool need to start again after their title winning season and I believe that all of the pressure is on them, they are defending Champions and we have only just been promoted. As Klopp said, he wouldn’t have chosen Leeds as the first game back.

In terms of team news, Gaetano Berardi is missing with a long-term ACL injury and Adam Forshaw is completing his return from injury.

Robin Koch and Rodrigo are both fit and ready to play tomorrow. I feel that Koch is the more likely of the two to start as he looks to form a defensive partnership with Liam Cooper.

Liverpool have made just one signing over the summer and their side is likely to remain largely unchanged from that of last year. There are injury doubts over captain Jordan Henderson who missed pre-season training and if he does make the game, he will likely start on the bench.

The games don’t come much bigger than Liverpool at Anfield, but as Marcelo Bielsa said, Anfield isn’t Anfield without the fans.

The game promises to be an entertaining one and certainly should be one where we can play our kind of football and I for one can’t wait for 5.30pm tomorrow.