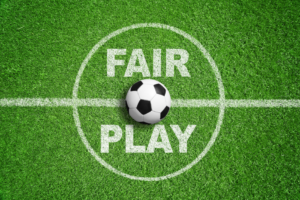 “….And the winner is Marcelo Bielsa and the Leeds United team”.

As a club so often vilified for, well just about everything, hearing these words in relation to the FIFA Fair Play Award seems almost unthinkable.

It is not an award that is new to the club, with the legend that is Lucas Radebe winning back in 2000. Captain at the time, Radebe was given the award for his commitment to fighting racism in football and his work with children in his native South Africa.

The act that won us this award was the controversial decision by Bielsa to demand we allow Aston Villa to score in that now infamous game in April. I didn’t agree with that call at the time and I still don’t agree with it now, it just doesn’t feel very Leeds.

What I do love however is the reaction from all those who aren’t Leeds, those who just don’t get who we are.

How can they be allowed to win they ask, they were found guilty of spying…looking at you Frank!  Well the irony isn’t lost on us, and whether you agreed with the decision or not, there’s an argument to say it was worth it just to see everybody whingeing.

I don’t know who voted for this award, but given that in the previous two years, the winners had saved actual lives, this seems to be a big shift in values from FIFA. Maybe they have seen our viewing figures and wanted a boost for the awards audience or maybe they just like a laugh.

Whatever the reason, we are officially the fairest of them all.