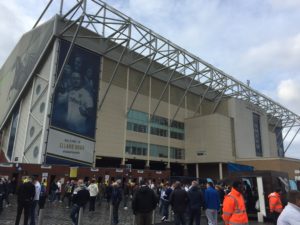 I have been thinking about this post for a while and was reminded when choosing my favourite Leeds moment for our Advent Calendar.

The chosen moment?  Going to a Leeds match at Elland Road for the first time.

I have been hearing about Elland Road since I was old enough to hear, but it took a few years more for me to actually go to a game.

The walk from the car to the ground, the many, many stairs to the Upper East stand, the general buzz around the place and the craziness that ensued with the first goal of the season.

It is a place that holds a special place with me, but what makes a building so special?

Over the summer, I was in Barcelona and visited the Camp Nou. I was genuinely excited to have a look but as soon as I walked into the entrance, I actually texted Mick saying, “nothing like Elland Road” and I meant it.

People talk of it being one of the greatest stadiums, but I wasn’t impressed at all, i just saw concrete and grass.

Football has taken me to many different stadiums. My day job to even more, but they just don’t have the same effect on me.

Yes, some stadiums may be more aesthetically pleasing and provide pre-match entertainment in the form of live singers, but for me they just can’t compete with Elland Road.  We all know that some parts have seen better days and it’s not nearly big enough, but it doesn’t matter, it still towers above the others in my opinion.

And the reason? They are just buildings and pitches.

It is the fans who make the heart of a stadium beat. The crowd bring it alive, not the fireworks and fancy padded seats (though I wouldn’t mind some of those).

It’s the Leeds fans that make Elland Road great with an atmosphere that you don’t find anywhere else. Think back to the European nights, our promotion back to the Championship and the crazy Boxing Day game last year. We do “limbs” like no other club!

A stadium means something to its own fans because it’s the place where our memories live.