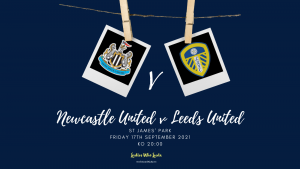 We visit St James’ Park this evening to take on Newcastle United with both teams seeking the first win of the season.

Steve Bruce’s team currently sit two places below us with just the one point this season and although we have had a difficult start to the season, this feels like a game we should be getting something from.

We will need to achieve that without three of our central defenders. Pascal Struijk misses this game after his appeal against the red card he received against Liverpool was turned down. We are still without Robin Koch who is continuing his rehab, whilst Diego Llorente is also injured. We will likely see Luke Ayling and Liam Cooper in the centre of defence with Stuart Dallas potentially moving to right back and Mateusz Klich returning to the starting lineup.

I hope we see Dan James start his first game for Leeds following his debut last week, I think that his pace might bring something different to our game and allow Raphinha to play in the number 10 role. However, I am not sure it will happen just yet because although Rodrigo hasn’t had a great start to the season, Marcelo Bielsa does like to give players a chance to improve.

Despite their injuries, it will be a tough game and with fans back, St James’ Park will be an entirely different ground to the last year but I think it is the game where we will get all three points and ease any talk of second season syndrome.