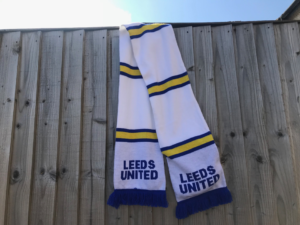 Today we received the devastating news that Norman Hunter has passed away.

A gentleman, a family man and a football legend. He was one of our own.

Under normal circumstances, we would all be able to lay flowers and pay tribute as a Leeds family tomorrow. Sadly, these times dictate otherwise, so for now our tribute is with our words.

We did not have the privilege to watch him play live, marshalling that great Don Revie side from the back alongside Jack Charlton.

We have listened enviously to those who were there to watch him play and know we are unlikely to see his kind again.

Over the years, we have heard so often that we need a player like Norman Hunter. Everybody knew instantly what that meant: no nonsense, hard work and dedication to the cause. He typified what it meant to play for Leeds United.

He was given the nickname, ‘Bites Yer Legs” at the 1972 FA Cup final against Arsenal. A reference to his tackling style and dedication to winning the ball at all costs.

It was a moniker that stuck with him and whilst he was a tough defender, he was also a player of great footballing skill.

As a footballer he was one of the very best. He won 28 caps for his country and was a member of England squad who won the World Cup in 1966. With Leeds he was a two-time league champion, FA Cup Winner, League Cup and Inter Cities champion.

Perhaps most tellingly, he was the very first recipient of the Players’ Player of the Year Award. His fellow professionals judging him to be the best amongst them in 1973/1974.

His playing stats are phenomenal. He played 726 games over 15 years for Leeds United, playing over 50 games for 9 seasons in a row. He went on to play for Bristol and Barnsley and all in time when strength and conditioning was barely existent.

In recent times, Norman was a regular sight around Elland Road on match day and as many commentators have said, he was still playing the game from the stands at every match.

It is heartbreaking that he will not be at Elland Road to see our promotion to the Premier League, something that he admitted was his dream to see.

It is perhaps some comfort that he was there for our last game against Huddersfield, to see that Luke Ayling goal and to see us go top of the Championship.

However, there can be no doubt that whenever promotion comes, he will be watching it all unfold with Billy and Don.

Would you like to help @TheAthleticUK look even better?

Are you good at turning stats and data into graphics?

We need someone brilliant, imaginative and hard-working with a few years' experience.

Get in touch if that's you.