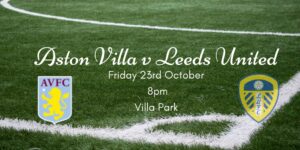 Tonight Leeds take on Aston Villa for the first time since that fateful day back in April 2019. The game that effectively ended our automatic promotion hopes, but also won us the FIFA Fair Play Award for the extraordinary decision to allow Villa to score a goal without challenge.

It’s a quick turnaround from Monday night but a chance to get the defeat out of the system. We lacked a spark in Monday, perhaps the result of having so many players away from the group due to international duty in the week before.

Tonight, we need to return to winning ways but we will need to do this without Kalvin Phillips who suffered a shoulder injury during the game against Wolves.

He will be replaced in midfield by Pascal Struijk who stood in for Liam Cooper and is clearly well liked by Marcelo Bielsa who has selected him over Jamie Shackleton.

Cooper himself remains a doubt for the game, however with Bielsa naming Stuijk in midfield, it may be an indicator that he is available to play.

Having narrowly retained their Premier League status, Villa have enjoyed a successful start to this season and sit in 2nd place, knowing a win will take them top of the league.

They have no new injury worries and are likely to name an unchanged side, however Keinan Davis is pushing for a return to the side.

I would take a repeat of our last visit to Villa Park. Who can forget the the 3-2 victory in December 2018 when Kemar Roofe scored in the 95th minute time secure all three points!