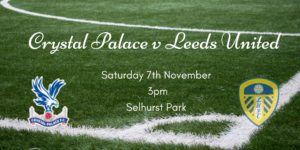 Tomorrow Leeds United take on Crystal Palace for the first time since March 2013 looking for a third successive away win in the Premier League.

It is a quick turnaround from Monday night but a chance to get the defeat out of the system. We didn’t play anything like we can on Monday and we will be looking to get back on track with a win tomorrow.

We have the chance to need to return to winning ways but we will need to do this without Kalvin Phillips and Diego Llorente who are both continuing their injury rehabilitation. We are also without Rodrigo who tested positive for COVID-19 and is now isolating.

Raphina has a late fitness check following his absence on Monday night with an ankle injury. He has shown glimpses of his abilities in the games against Wolves and Aston Villa.

Jamie Shackleton was given the nod to start against Leicester, whether we will start tomorrow remains to be seen and it might be that Pascal Struijk or Tyler Roberts start in midfield.

Palace sit one place below Leeds in the Premier League and go into this game having won just one of their last 7 home games.

They are without Luka Milivojevic who is serving a three match suspension following his sending off against Wolves last weeked. They are also without James Tompkins, Joel Ward and Tyrick Mitchell who all have short term injuries. Gary Cahill and Jordan Ayew are however back and available to play.

Leeds are looking to put the London curse behind them, following just one league win in the past 20 matches in the capital and whilst the season is a long one, this game feels a key one.