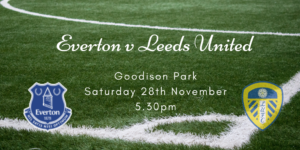 Leeds travel to Goodison Park this evening to face Everton as the fixture schedule starts to ramp up as we head towards Christmas.

The draw with Arsenal stopped our losing run and we need to build on that performance tomorrow by taking our chances against Carlo Ancelotti’s team.

Like Leeds, Everton enjoyed a great start to the season and a brief spell at the top of the Premier League but have slipped to sixth following a run of three defeats prior to the international break.

We are still without Pablo Hernandez, Jamie Shackleton and Diego Llorente who are all still recovering from injuries, Marcelo Bielsa is likely to name an unchanged line up. The one change could see Rodrigo return to the starting XI following his impressive game for the u23s.

Everton will be without Lucas Digne following his recent operation on an injury sustained in training. They are also without Seamus Coleman and Jean-Phillipe Ghabin

Tomorrow will be our 10th game in the Premier League and this is where it becomes mentally tough. The early season newness has worn off and teams know how we play now. These next few games are the ones when the fans would make the difference and provide an added boost.

However, for now we are all still armchair fans and we are all hoping to see a Leeds win tomorrow.