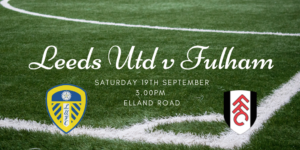 Tomorrow, for the first time since May 2004, Elland Road will host Premier League football again.

Our opponents however have been more recent visitors, with our last match against Fulham just 12 weeks ago. It might have only been 3 months but a lot has changed since that last meeting.

Leeds went on to clinch promotion and the league title, whilst Fulham fans had to endure the play-offs to see their side upset the odds and clinch a Premier League spot.

This game is particularly important for Leeds, coming on the back of two defeats and you get the feeling that a win tomorrow would stop any doubts creeping in.

After the indifferent display on Wednesday tonight, Marcelo Bielsa is expected to return to fielding his strongest side with Liam Cooper set to re-join the side after missing the last two games through injury.

Patrick Bamford showed last week that he deserves his place in the starting line up with Rodrigo looking like he needs another match or two to fully get to grips with the Leeds style of play.

Scott Parker has no new injury worries over his side and Alphonse Areola, Kenny Tete and Antonee Robinson may make their Premier League debut for Fulham after featuring in the Carabao Cup win in midweek.

Aleksander Mitrovic was named amongst the substitutes last week for the game against Arsenal and is likely to make the starting line-up this time around.

This was always a tough fixture in the Championship and I don’t think tomorrow will be any different. I actually think that we may find this game more difficult than last week, Fulham do not play in the same way as Liverpool and are unlikely to allow us the space we had last Saturday.

That said, I do think we will record our first Premier League win since we beat Blackburn Rovers in April 2004.