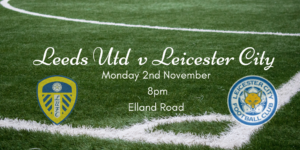 Tonight sees Leicester City as the visitors to Elland Road for the second Monday Night Football fixture in three weeks.

The 9 day break has proved beneficial for Liam Cooper, who has recovered from his groin injury and will return to the side this evening. Kalvin Phillips remains absent as he continues his rehabilitation from the shoulder injury he picked up against Wolves.

As such, it is likely that Stuart Dallas will move up into midfield and Gjanni Alioski keeping his place in the starting line up at left back.

Pablo Hernandez has not started a game since the Liverpool match and it remains to be seen whether he will take his place from the outset or whether Rodrigo will play the supporting role behind Patrick Bamford.

Leicester are without Timothy Castagne who is suffering with a hamstring problem and have doubts over Jonny Evans as he missed their Europa League game on Thursday with a back issue.

Jamie Vardy has been suffering with a calf injury but is expected to start this evening after completing 70 minutes of the win against AEK Athens.

This is a big game tonight, we have shown our credentials against the very top sides and this feels like another test against a side who sit just below that group of teams.

Whilst we are currently 12th in the league, a win would take up back up to fourth at the very least, with third spot dependent on goal difference. With another international break just a week away, we want to ensure we go into it with maximum points on the board.