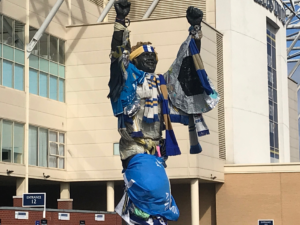 Tonight Leeds take on Southampton at Elland Road, a fixture that was re-arranged due to the FA Cup.

The announcement that fans will be able to return en masse from May and then normally from June has certainly provided a boost and there is a renewed sense of optimism that normality is within reach.

I am not sure whether Leeds will choose to have the 10,000 fans in for the West Brom game. I think I would prefer to have some high profile pre-season games before starting next season with a capacity crowd. The thought of Marching on Together resounding at full volume again soon is actually giving me goosebumps!

If the rumours are true then Marcelo Bielsa is likely to extend his contract remain for next season so we can look forward to seeing this style of football in the Premier League at Elland Road all next year.

I think I will still struggle to watch the games on television but knowing that there is a return date will hopefully make it easier.

Leeds will be without Kalvin Phillips who remains sidelined with a calf injury and he joins Rodrigo, Ian Poveda, Robin Koch, Gaetano Berardi, Adam Forshaw on the lengthy injury list.

Diego Llorente is available and will hopefully be able to overcome his injury issues and have a good run of games to show his ability. If he does return to the starting line up, we may see Pascal Struijk move up into a midfield role.

Southampton sit two points behind Leeds in the table having enjoyed a brief spell in the Champions League places and they will be looking to kickstart their season again.

They are without Ibrahima Diallo, Kyle Walker-Peters and Theo Walcott but Stuart Armstrong could return for the Saints this evening.

We are an incredibly unpredictable side but I think tonight we will get all three points.