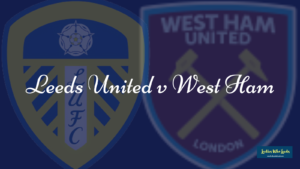 West Ham are the visitors to Elland Road tonight and both sides will be looking to return to winning ways.

The Hammers are currently eighth in the league but are only three points ahead of Leeds such is the league this season.

We are without Robin Koch who aggravated his knee injury in last week’s game at Stamford Bridge and will now be out for three months following surgery. Diego Llorente, the man who replaced Koch is also out with a muscle strain. This means that Luke Ayling will partner Liam Cooper in defence for the foreseeable future.

Koch was a doubt ahead of the game against Chelsea and it was a risk that didn’t pay off, but it is the Llorente injury that concerns me. His appearance last week off the bench was his first for Leeds following injury on international duty and he is now out for at least two weeks. I do wonder with some players whether the Marcelo Bielsa regime is too much for them; the intense training and the required level of fitness makes Leeds probably one of the hardest teams to play for. I hope that Llorente comes back stronger and has a good run in the side because we can ill afford to have international standard players missing every few weeks with muscle strains.

The good news is that both Jamie Shackleton and Pablo Hernandez are fit and available. They may start on the bench but I think we need to have them involved. particularly Hernandez, he possesses that ability to create something out of nothing and can turn a game around in seconds.

West Ham have Ryan Fredericks available following his recovery from a groin strain but are doubtful over the fitness of Michail Antonio so Sebastian Heller may continue upfront for the Hammers.

The stats are in our favour tonight as we have never lost a Premier League home game on a Friday so hopefully that run will continue with all three points tonight.