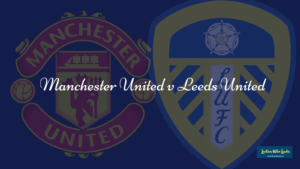 When the fixtures were announced, this was the game we were all looking for. The chance to go back to Old Trafford and beat them again.

We have that chance again tomorrow and go into the game on the back of our 5-2 win over Newcastle.

I do think it will be a tougher game tomorrow, they have certain players who are very capable of winning a game and there is genuine history with this fixture. Some football rivalries are forced, this is certainly not one of them. The real shame is that there will be no fans there to watch in the stadium.

We go into the game with no new injury worries. We know that Robin Koch is a long term absentee and Diego Llorente is still unavailable.

Manchester United also have no new injury concerns are are expected to have Edinson Cavani back following his muscle injury last week. Dean Henderson started against Sheffield United earlier this week however, David de Gea will most likely be back in goal today.

This is a game that will have drama. I have no doubts there will be VAR involvement, maybe late goals and a few cards that are not of the Christmas card variety.