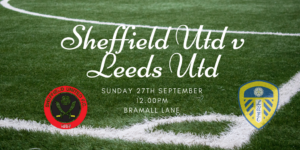 After so many years in the EFL, where a Yorkshire derby was a regular occurrence, it feels strange that Leeds United only have one this season.

Only ourselves and Sheffield United represent the county in the top division and tomorrow sees the first meeting of the season. Leeds travel to Bramall Lane tomorrow for the first Yorkshire derby in the Premier League since May 2001.

Sheffield enjoyed an impressive return to the Premier League last year and looked very much in contention for a European spot prior to the season break. They eventually finished the extended season in ninth place.

Whilst we have enjoyed an exciting start to the season so far with 14 goals in two matches, the Blades have yet to get on the scoresheet and have lost their opening two games.

Marcelo Bielsa will be hoping for a tighter defensive performance tomorrow and new signing Diego Llorente is available. Although whether he will be chosen over Liam Cooper or Robin Koch is doubtful. I think he might take his place on the bench tomorrow before being introduced to the starting line up in the next couple of weeks.

Sheffield will have a change in their defence as John Egan is suspended following his red card against Aston Villa last week.

Pablo Hernandez is set to miss the game with the injury he suffered in the warm up last week and Adam Forshaw is not yet ready for his return from his long-term injury.

Rodrigo was the late replacement for Hernandez last week and he well could start again as Bielsa seems to prefer introducing Tyler Roberts from the bench rather than from the outset.

Patrick Bamford will retain his place upfront after his impressive start to the season and he is looking for his third goal in three games. A target that is also shared by both Mateusz Klich and Helder Costa.

Sheffield may prove more of a challenge to our style of play than both Liverpool and Fulham and whilst I doubt we will see a 4-3 result again, I do think we will prove too strong for them tomorrow.