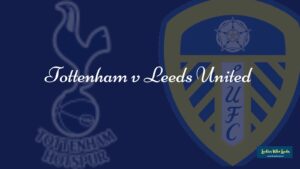 2021 starts with a trip to North London for Leeds United as we take on Jose Mourinho’s Tottenham, looking to build on an already successful festive period.

After the emphatic display against West Brom last week, we will enter this game with optimism, aiming for our third consecutive league victory.

Spurs are currently seventh in the table, however only three points separate the two sides and we are looking to close that gap tomorrow.

Going into this game, Tottenham’s form hasn’t been favourable and they have failed to win any of their last four Premier League matches.

Their game against Fulham was postponed earlier in the week so they have had more time physically to recover, however the late postponement will not have done them any favours.

We will be without both Liam Cooper and Diego Llorente who remain side-lined due to ongoing injuries. Doubts remain over Mateusz Klich who sustained a thigh injury in our win over West Brom last week and should he fail his fitness assessment Jamie Shackleton or Pablo Hernandez will likely take his place.

Tottenham will be without Gareth Bale who is side-lined due to a calf strain and both Lucas Moura and Carols Vinicius remain doubtful.

Tomorrow may well prove to be a challenge, but hopefully we will see the Leeds United we have been accustomed to seeing recently.