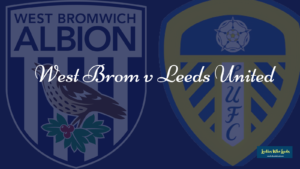 In our final game of 2020, we travel to the Hawthorns to take on Sam Allardyce’s West Brom.

West Brom are currently 19th in the Premier League, however after holding Liverpool to a 1-1 draw at the weekend, this game could prove a challenge for Leeds.

After a win against Burnley on Sunday, we go into this game looking to secure back to back victories.

West Brom will be without midfielder Jake Livermore who is still serving a three-game ban, they are likely to welcome Matheus Pereira back into the starting line up after serving his suspension.

It looks likely Bielsa will name an unchanged line up to the team who ground out a 1-0 win over Burnley on Sunday, with both Liam Cooper and Diego Llorente unavailable.

2020 has been a rollercoaster year like no other, from the postponement of football to promotion to the Premier League, it hasn’t been the easier of rides. However a win would see us end the year in the top half of the Premier League, which was last achieved in 2002.