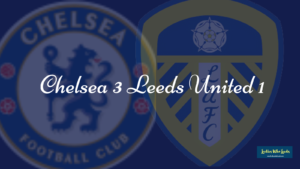 Leeds United were in action in front of fans for the first time since March, unfortunately it was the Chelsea fans in attendance that saw their team victorious with a 3-1 win.

The final score suggests it was more comfortable for Chelsea than it actually was, the third goal on 93 minutes glossed over the fact that we were in contention for much of the game.

Whilst we did not dominate possession to the same extent as our previous two games, we still edged it slightly with 54%. It was our 9 shots on target to Chelsea’s 24 that ultimately gave them the win this time around.

Patrick Bamford opened the scoring after just 4 minutes, a goal he will have much enjoyed having spent 5 years at Chelsea without ever making a first team appearance.

We were unsettled not long after when Robin Koch went down injured, his inclusion was in doubt prior to the match and the risk to play him didn’t pay off as he walked of after just 9 minutes. This did mean a debut for Diego Llorente who came on to partner Liam Cooper in defence.

We had chances to double our lead but the second goal evaded us and Chelsea drew level with a strike from Olivier Giroud.

After the break, Chelsea added a second through Kurt Zouma and sealed the win with Christian Pulisic getting a third to take all three points in front of their fans.

The 2000 Chelsea fans took an instant dislike to Llorente, so much so that I had to check if he was a former player or had ever caused them any form of harm in the past. The pantomime noises every time he got the ball were apparently the result of his reaction to a tackle in the first half.

I know that some fans in the ground is a start and this was my way of thinking prior to the match but having seen that 2000 fans can make quite a noise, then there needs to be a new system. Either stop fans until we can all have them in or allocate a percentage to the away fans. It might be just 5% but we all know how noisy 100 Leeds fans can be and it would provide a boost to every team to not have the entire crowd against them.

The result wasn’t the one we wanted but Chelsea are genuine title contenders this year and we pushed them all the way. We certainly do not play like a newly promoted side and I still think we will win more than we lose this season. Hopefully the next win will come against West Ham at Elland Road on Friday night.