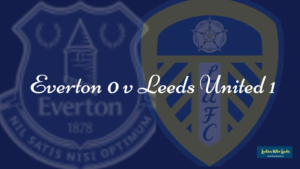 Watching this game gave me a strong sense of deja vu, like we were all watching last week’s game all over again. We dominated possession, had countless shots but for 80 minutes there were no goals.

Both teams had goals ruled out for offside and it felt like one of those games where, although we were the better team, Everton might just get one. However, Raphinha chose the perfect moment to score his first Leeds goal, with a low shot beating Jordan Pickford in the Everton goal.

I have to admit that had my doubts over Raphinha, no doubt scarred by our experience of the previous Brazilian players Adryan and Roque Junior. There is no comparison though, Raphinha is quickly making his mark on this team and is clearly impressing Marcelo Bielsa who spoke highly of his abilities in his post-match press conference. He is currently keeping Helder Costa on the bench, which is no mean feat in itself.

Everton had their chances with James Rodriguez, Richarlison and Calvert-Lewin all going close but Ilian Meslier was immense in goal and is continuing to show why he is being talked about in the French senior team circles.

Kalvin Phillips was outstanding under the watchful eye of both of his managers, with Gareth Southgate in the stands at Goodison. A performance that no doubt confirmed to Southgate that he belongs in the England team.

There are still areas to work on but we are 10 games in and we are 12th in the league and constantly referred to as the Premier League entertainers. I think we would have all taken that at the start of the season.

Having to watch with commentary still feels strange to me, it feels like they are talking about old news, I often forget that this Leeds are new to most people. We have been watching this Bielsa team from the beginning, from that very first game against Stoke back on 2018. We know that we run from the first second and don’t stop until the very last.

That work ethic is needed more than ever as the big games just keep coming with Chelsea up next at Stamford Bridge, the first meeting with Frank Lampard since that awful night at Elland Road in May 2019.

It will also be the first game that we will play in front of fans since March, how that will work I don’t know but it’s a start and hopefully we can start to get back to Elland Road. The Premier League think they know what Leeds are like now, but they haven’t seen anything until the fans are back!