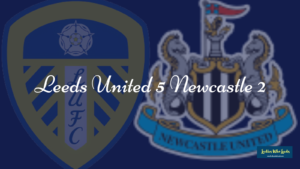 When Leeds answer the doubters, they answer them in style.

There were those before the game, claiming we had run out of steam, that our fitness regime had taken its toll and that our injuries were starting to mount up.

I hope those people were watching the way six of our players were flying down the pitch on 85 minutes seeking a fourth goal.

We thoroughly deserved to win this game by the margin we did and it was a much needed confidence boost ahead of this weekend’s game with the old foes Manchester United.

It was Newcastle who took the lead first when Jeff Hendrick scored against the run of play but Patrick Bamford equalised just 9 minutes later to level things up and it stayed that way until half time.

There was little indication in the first half that this would be a 7 goal game, but after the break, Rodrigo stepped up to head the ball into the back of the net.

Newcastle equalised through Ciaran Clark, again from a set piece. This was the eighth goal we have conceded from a set play this season.

Stuart Dallas caught the Newcastle defence off-guard when he met Mateusz Kilch’s cross to head beyond Karl Darlow and after that the game was all Leeds.

Pablo Hernandez made his return from injury and was back to his magical self, providing two assists for Gjanni Alioski and Jack Harrison, the latter being a contender for goal of the season so far.

It was a game we needed to win, having 71% of the possession but to stop the noise about us. One of the best things about this Marcelo Bielsa team is the ability to bring a performance when it really matters and the pressure is on and we did just that against Newcastle.

On to the big one next, Manchester United away on Sunday. Same again please!