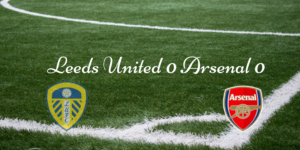 After a 15 day break for international fixtures, Leeds United were back in action against Arsenal at Elland Road on Sunday.

This was a game we should have won, we dominated possession and were the stronger side.

However, despite having 13 shots, only 2 were on target we were unable to convert our chances and the scores were level at the half time break.

The second half saw Arsenal reduced to 10 men after Nicolas Pepe was sent off after a headbutt on Gjanni Alioski. However Leeds were unable to take advantage and despite having a further 12 efforts on goal, couldn’t score.

We were unlucky with three of those shots which all found the crossbar or the posts. Had any of them been a centimetre the other way and we would be talking about a dominant win over Arsenal. However, this is the Premier League and this is Leeds United, luck is not often found.

We should have won the game and Marcelo Bielsa will be disappointed that out of 25 shots, only 4 were on target.  There are however, many positives to take from the game with Kalvin Phillips returning, Raphinha looking a constant threat and Ian Poveda showing his abilities off the bench.

The run of defeats has ended and we can go to Everton on Saturday full of confidence in our ability, we just need to remember the scoring boots!