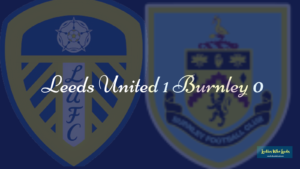 Leeds proved that although we have become the Premier League entertainers, we can dig in and defend when it is needed.

Burnley proved a different type of opposition and did not allow us the space to play our usual style of football. They made life difficult for us and we had to work hard for our win yesterday.

The only goal of the game came from a Patrick Bamford penalty after just 5 minutes after he was brought down by Burnley goalkeeper Nick Pope. It was Bamford’s 10th goal of the season and only 3 behind the top scorer Mohamed Salah.

Burnley had a goal ruled out after it was adjudged that Illan Meslier had been fouled in the lead up to Ashley Barnes’ shot. It is fair to say that Sean Dyche and his team were less that pleased, but this is football and it happens. We have been on the end of too many poor refereeing decisions to care whether it was a foul or not.

We had further chances in the first half to double our lead but none of them found the back of the net and we went in 1-0 up at half time.

The second half was predominantly all Burnley as they continued to push us back and force Meslier into action on numerous occasions. At one point it felt like it was just corner after corner but our defence stood resolute and we showed that whilst we prefer to entertain, we can also fight when we need to.

It was an outstanding defensive effort with a new partnership of Luke Ayling alognside Pascal Struijk. It was expected that Diego Llorente would replace Liam Cooper but Marcelo Bielsa opted for the Struijk and he repaid the faith shown in him.