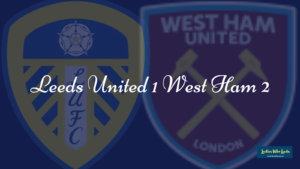 West Ham claimed all three points with a 2-1 victory at Elland Road on Friday night.

This was not the Leeds team we have seen progress so far under Marcelo Bielsa, we looked a shadow of that team and as Bielsa said himself, were lucky to only lose by one goal.

Injuries to Robin Koch and Diego Llorente meant we were forced into changes at the back with Luke Ayling partnering Liam Cooper in central defence. This is where West Ham used their height advantage and we just couldn’t compete.

The team being named days in advance possibly had an impact on this game as West Ham knew exactly who they would be up against and Bielsa has said he will not be doing that in the future.

The game started well with a penalty after Patrick Bamford was taken down in the area. Mateusz Klich missed with his first attempt but VAR came to the rescue and deemed that Fabianski was off his line. Klich made no mistake with the second attempt.

There is work to do and we need to start getting some points back on the board but we have the team and the manager to rectify the slide. We certainly have the fans and hopefully, there will be some back inside Elland Road very soon and that could be the catalyst to turn the season back around.