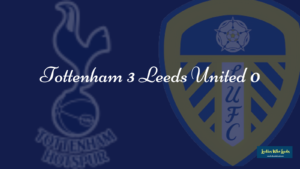 Tottenham claimed all three points with a 3-0 victory over Leeds at the Tottenham Hotspur Stadium on Saturday.

The scoreline does not reflect the chances Leeds had in the game but the London curse continues.

Leeds fielded an unchanged line up with Luke Ayling and Pascal Struijk cementing their defensive partnership.

The game started well with chances for Gjanni Alioski and Patrick Bamford but it was Spurs who took the lead after half an hour. Alioski brought Steven Bergwijn down just inside the area and Harry Kane duly converted the penalty.

They doubled their lead just before half time when Son scored his 100 goal for the Jose Mourinho’s side.

It was Toby Alderweireld who sealed the victory just 5 minutes into the second half with a header from Son’s corner.

Kalvin Phillips also picked up his 5th booking of the season and he now misses the game against Brighton.

The game did not feel like a 3-0 defeat, we didn’t play badly and we had our chances, we just need to start converting the early chances and putting teams under pressure.