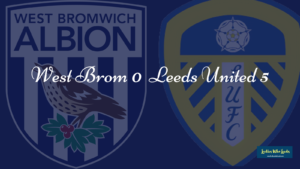 There seems to be developing something of a pattern here, Leeds signing 2020 off in the same way they signed of 2019. Maybe it is a sign of the good things still to come this season and I for one am not ruling out European football next season.

The game yesterday was Bielsa Ball at its finest. We did not relent and had it not been for half time, I genuinely think we could have scored 8 or 9. It was a complete team performance, one which was achieved with a newly formed defensive partnership and one where 5 goals were scored and our striker wasn’t amongst the scorers.

These games come along every so often, where the game passes quicker than any match before and you could happily continue watching for hours rather than willing the final whistle to go. We enjoyed a few last season but this was the first game in the Premier League where I felt that we were in complete control.

I did think West Brom would be a tougher prospect having seen them park the bus against Liverpool but we were just too quick and once the floodgates opened, nothing was going to close them.

Sawyers’ own goal was a gift but the next 4 goals were outstanding. Gjanni Alioski, Jack Harrison, Rodrigo and Raphinha all seeming like they were competing to score a better goal that the one before them.

West Brom could not compete and watching the game, it was hard to believe that we were both promoted at the same time.

I was hoping to see Patrick Bamford get his goal to add to his tally for the season but those goals will come and who knows, the golden boot might follow.

I know it was just one game and this is a long season, but we do not look like a recently promoted team and having watched this team grow over the past two years, I do believe that we will all be back watching European football at Elland Road again very soon.