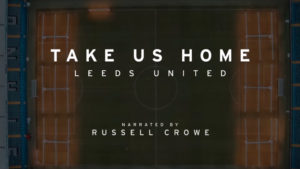 The 2018-2019 season was a season like no other, even in Leeds United standards. Spygate, deadline-day confusion, an uncontested goal, drama was never far away.

Take Us Home Leeds United, exceptionally narrated by Russell Crowe, told the story of our first season under Marcelo Bielsa and how we narrowly missed out on Premier League promotion.

Having watched the series in full here’s my main talking points:

So close. Having successfully passed his medical, chosen his squad number, completed the promotional shots and signed half of the paper work, all that was needed was for the Swansea Board to give the green light. But it never came. James headed back to Wales, leaving Victor Orta inconsolable. It was heavily publicised that James was close to signing but this showed just how close. It’s no secret that the signing of James would have further boosted our chance of promotion, instead we were all left to think what could have been.

From the first episode my opinion of Orta changed, as somebody who is often criticised and hasn’t had the easiest of times at the club, I was shocked to see his passion for Leeds United pouring through. From his celebration antics in the Directors Box to his floods of tears over the failed signing of Daniel James it quite clearly shows that Victor Orta is in fact Leeds.

From the Euphoria of Boxing Day to the heartbreak of both Wigan and Derby, it was an emotional and draining season. Take Us Home succinctly captured the journey and enforced the message that the alliance between the club, players and supporters had returned stronger than ever.

We didn’t get the ending we hoped for but this is Leeds and nothing is ever simple.