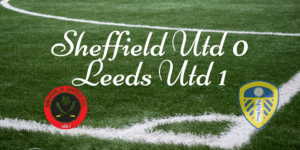 Leeds United are 6th in the Premier League following the victory over Sheffield United at Bramall Lane.

There was just the one change for Leeds with Tyler Roberts chosen ahead of Rodrigo to replace the injured Pablo Hernandez in midfield.

As expected, the game was not as free flowing as the previous games against Liverpool and Fulham. Sheffield United are a team known for having a solid defence and that showed yesterday as we were made to work hard for the win.

The Blades also had chances to score in the first half and looked certain to take the lead on the half mark with a shot from John Lundstrom, however it was kept out by Ilian Meslier with a save that is one of the saves of the season so far. The Leeds fans have known for a while now just how good Meslier is but the secret is out and the rest of the football world are now well aware of the abilities of the 20-year-old Frenchman.

The second half was much of the same with both sides having chances. Such was the nature of the game that the breakthrough did not come until the 88th minute.

A sublime cross from Jack Harrison was met by Patrick Bamford who headed home from close range to score his third goal in three games. He also becomes the first Leeds United player ever to score on his first three top flight games for the club.

Bamford is a striker in form and adding goals to his all-round game is one of the most pleasing aspects of this season so far. He will be looking to continue this scoring form against Manchester City next Saturday.

Our defence looked more solid that in the previous two games with Robin Koch looking much more settled alongside Liam Cooper, who made his 200th appearance for the club.

The only bad thing about our fantastic start is that we can’t be there and I for one don’t feel part of it this season. I have never been very good at watching games on TV because I like to see the whole game. I always watch what’s happening on the bench, who is warming up and what the players are doing off the ball. These are the details you miss watching the game from a camera view point.

It feels like the matches are happening but a big part of the game is missing.  The absence of fans was particularly noticeable yesterday, the atmosphere is what makes a derby game and you can only imagine the scenes when the winner went in.

I desperately hope that the situation improves again and that trial games are brought back soon and we can start to look forward to getting back to Elland Road again and watch our challenge for European football in person.