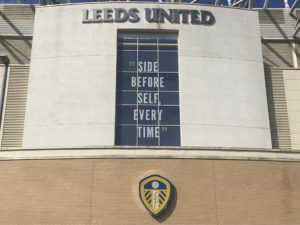 We have seen what feels like a thousand players leave Leeds United over the last 15 years.

However, the announcement that Pablo Hernandez and Gaetano Berardi are leaving has hit harder than most. Both were expected to leave but the outpouring of emotion across social media shows the esteem these two players are held in by the Leeds United fans. .

I remember when we started this blog and we mentioned our favourite players and I said it was too close to call between Hernandez and Berardi and that remains the case today.

They are polar opposites in playing style but their impact on the fans and the club is the same.

Gaetano Berardi is old school Leeds. For those of us who are too young to remember the great sides of the past, he gave us a taste of “Dirty Leeds”. We knew he was one of our own when he was sent off on his debut against Accrington Stanley. A throwback to the old days, a player who leaves it all out on the pitch and gives it absolutely everything he has for the team. He truly embodies the Bremner spirit of “side before self, every time’.

That spirit has seen him earn his fair share of red cards and subsequent suspensions but under Marcelo Bielsa, we have seen him mature as a player and although an ACL injury denied him a full season in the top tier, last weekend he finally became a Premier League player, an accolade which is more than deserved.

Then there is Pablo Hernandez, El Mago.

He is the type of player I never thought I would see the like of at Leeds.

A player who is unanimously adored by the fans and whose name will continue to be sung around Elland Road for years to come. He is one of the main reasons we all fell back in love with Leeds again.

At the start, it felt like he was too good for us. His ability to see the pass that nobody else could, to create space where there was none and to change a game in a split second. He made it all look so easy and there were times when I wondered how he was still at Leeds.

Then came Marcelo Bielsa and suddenly it all started to click, Pablo was where he belonged.

There were a few times last season when it felt like he was single handedly taking us out of the Championship. Towards the end of the season, there were games when we were all just waiting for half time when he would be subbed on. His natural ability to produce magic made the players around him believe that we could win it all and we did. I doubt anybody will ever forget that goal at Swansea!

He is quite simply the best player I have ever seen play for Leeds United in the 20 years since I started watching.

There will be players who have similar abilities and passion, but it won’t be quite the same. Pablo came at the time we needed him the most, he brought the spark of magic needed to take us out of the dark days and back to the Premier League.

It is fitting that fans are back on Sunday to say thank you. We were there for the start of both players’ Leeds careers and we will be there at the end. The journey they have taken us on has been quite a ride.

England get their World Cup campaign underway this afternoon!

Comment below if you will be watching and your score predictions? 🏴󠁧󠁢󠁥󠁮󠁧󠁿